Veggie / Vegan. Not such a new idea.

Pythagoras was a vegetarian circa 570BC and a vegetarian diet was known as a Pythagorean Diet right up until the 1800’s. What’s that got to do with wine I hear you asking? It’s just grapes isn’t it? Not necessarily, and there is a growing population that want the info to be able to make a choice.

It is not uncommon for various animal derivatives to be used in the process of clarifying (also known as fining) wine. The most common fining agents are – egg albumen, isinglass (derived from fish bladders), casein (milk protein). And less often – gelatin, fish oil, bone marrow, blood, chitin (fibre from crustaceans).

However, many growers have produced wine for generations without the use of animal derivatives. Some have done this by default rather than design, as their development in processing found that other locally, and readily available materials (clay, limestone, plant extracts, or silica gel) did just the job required. Historically the choice of fining agent was probably driven by availability, and what type of activity a grower’s neighbours were involved in. e.g. quarrying – clay / limestone, fishing – swim bladders etc.

Despite  the fact that these components will not be consumed (as they have been used, done their job, and been filtered out prior to bottling), many would prefer to avoid those wines. This information is not normally on the label, although some producers may use a recognised vegan logo where all animal products are avoided. An informed choice is becoming a crucial factor in the marketing of all food stuffs, and there is a growing population that choose where their hard earned cash is going based on these things.

All producers know which way they are doing things, but it is up to the retailers to make sure that the paying public have the information to make their choices.

A Sense of Normality!
We can soon eat inside in our favourite pubs & restaurants, and Cana are busy restocking them. Rest assured though…
Read more 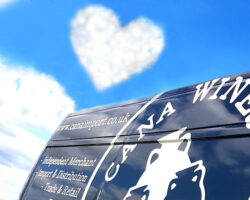 Thank You. You Are Our Heroes
This has been a challenging time for many of us, and a great number of independent businesses have re-invented themselves.…
Read more
Follow us on Twitter @canaimport
Cana Import - 1 week ago
@TreeHouseBkshop Merry Christmas x
0 Retweets 0 Likes Reply
Follow us on Instagram @canaimport
Merry Christmas all. Pissing rain and dog walk, la

When you wake up to a review like this ❤️ #wi

Too good not to share! Yorkies made to order as an

Christmas is just days away, don't leave it too la

Load More…
Get the latest news, offers & updates from our newsletter

You can find out more about which cookies we are using or switch them off in settings.

This website uses cookies so that we can provide you with the best user experience possible. Cookie information is stored in your browser and performs functions such as recognising you when you return to our website and helping our team to understand which sections of the website you find most interesting and useful.

Strictly Necessary Cookie should be enabled at all times so that we can save your preferences for cookie settings.

If you disable this cookie, we will not be able to save your preferences. This means that every time you visit this website you will need to enable or disable cookies again.

This website uses Google Analytics to collect anonymous information such as the number of visitors to the site, and the most popular pages.

Please enable Strictly Necessary Cookies first so that we can save your preferences!